On Saturday May 20, 2017 Pat Gallant Charette became the oldest swimmer to successfully cross the Kawai Channel( 23:54.) She told me right after the swim that she was exactly 66 years and 107 days old. Great job Pat. I stopped counting after 50 but maybe now I'll catch some of that enthusiasm and embrace aging.

Many swimmers and most followers of the Kaiwi swims are focused on the fastest crossing times but being in the water for 24 hours is some real serious endurance.

I asked Pat to answer the 12 Questions and here are her responses.

1) Other than completing the Oceans 7, why swim the Kaiwi channel? Why swim Channels?

My sole purpose of swimming Kaiwi Channel was to successfully swim another Oceans Seven Channel. I have completed 6 of 7.

My crew and I stayed at the Ala Moana Hotel in Honolulu, Oahu. We flew to Molokai the day of my swim. Upon arrival, we had a pre-booked taxi drive us to the designated beach for the start of the swim. Steve Haumschild coordinated the flights and booking of taxi.....huge help. I am very grateful to Steve for helping us.

My crew had to swim about 100 yards to Michael Twigg-Smith's boat. The swim was easy due to calm conditions. A kayaker transported their minimal gear to the boat for them.

3) What were the conditions like at the start? Can you describe your surroundings? What was the beach like? People on the beach? Surf?

The conditions along Molokai was very calm. We waited on the beach for a couple of hours for escort boat to arrive. Of course, there was no shade on the beach. Crew and I began to feel overheated so we got off the beach and looked for some shade. I'm glad that we brought plenty of water. Moments before the start of the swim it started to rain heavily. I started my swim in very calm conditions.

4) Could you see Oahu at the start? How did that feel?

I could see Oahu from Molokai. It was a great distance away and I knew I had a very long swim day ahead. I was fully prepared and trained for a 24 hour swim.

5) What was your feeding schedule like? What did you eat/ drink? Did it stay down? Any issues with feedings? Technique?

My feeding plan: Swim for first two hours then stop for a feed. Thereafter, every hour feeds. However, due to issues with vomiting, I had to go to Plan B and have every 30 minute feeds (smaller amounts to tolerate). Due to very warm water and air temp, my feeds alternated with plain water and carbohydrates. I knew that drinking plain water was vitally important in staying well hydrated.

6) Some swimmers experience seasickness. Did you?

I experienced sea sickness on several occasions. On the 8th hour of swimming I felt like quitting because of the many episodes of vomiting and painful jellyfish stings. My kayaker Michael Scott was amazing. He encouraged me to swim to daylight. That was the turning point for me. Once it was daylight I felt energized and had no thoughts of quitting.

7) Describe the conditions during your swim. Any particular challenges? Estimated wind speed? How did water temp feel?

I was very fortunate to have very calm conditions in the beginning of my swim. It started to get choppy at the halfway point. I found the currents to be very strong and powerful toward the end of my swim. Water temps were comfortable. As a cold water swimmer from Maine, I thought I would get overheated swimming in Hawaii but I did not have any issues.

8) Did you see or feel any marine life? Did you or crew have any shark deterrent? Jelly stings?

We had two Shark Shields. While one was attached to a kayak the other was recharging on the boat. My crew swapped them every 6 hours. I got stung by jellyfish at least ten times during the night. Unfortunately I was stung across my face. I had to remove the tentacles from my face. My lower lip was extremely painful.

I heard the sounds dolphins and whales. Pilot whales were near me. During the night, I was bumped in my leg. Boat crew thought it was a dolphin because they had been in the area.

9) Describe the last quarter of your swim and the finish. Where did you finish?

The last part of my swim was horrendous. Water was choppy. Currents were pushing me back and sideways. It was very difficult moving forward. My finish was not pretty. As I attempted to stand in waist depth water, I was slammed by a large wave on Sandy Beach....causing me to tumble doing somersaults a few times. Again, I attempted to get out of the water and I got slammed again. Yikes! Very powerful waves! I decided to crawl up the beach on my hands and knees. I finished my swim in 23 hours and 54 minutes at the age of 66 years and 107 days old.

10) Who did you bring with you to help support your swim? How did the ones who went on the boat do?

My crew consisted of family members. David & Jeannie Gallant and Bill & Jean Gallant. Jeannie stayed on land and dealt with planning and logistics. David, Bill, and Jean were on the boat. They were very busy with preparing my feeds, swapping out Shark Shields, and constantly monitoring my swim. They did an incredible job.

11) What did not go well was dealing with the powerful waves at Sandy Beach.

I never experienced such forceful waves.

I'd stick with my plan to crawl up the beach on my hands and knees because I knew that I would have "sea legs" if I stood immediately. I did not want risk falling from a standing position.

12) Favorite memories from this experience?

My favorite memories: Everything about this swim was memorable.....even the jellyfish stings. Ha! Ha! It was an adventure of a lifetime. 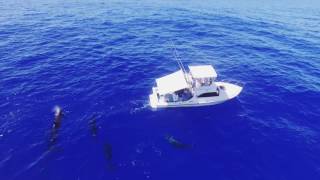